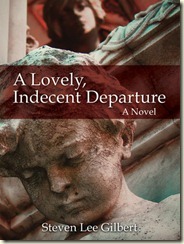 Summary: A Lovely, Indecent Departure is the riveting and emotionally-charged debut from a promising new voice in literary thrillers, and a captivating story about a mother’s love and desperation set amidst the heart wrenching landscape of child custody.
Anna Miller wants only one thing, her son, and she will do anything to keep him. When a district court awards custody of Oliver to his father, she abducts the five year old and flees to Italy where with her family’s help they disappear into the fabric of her native homeland. Told in prose that is both stripped-down and overpowering, Gilbert shapes the everyday conflict of child custody into a stunning search for sense of worth. Standing in the young woman’s way is Evan Meade, the boy’s guileful and mean-spirited father, who hires a private investigator when the efforts of the embattled local sheriff, Monroe Rossi, fail to track them down. But as the investigation draws them all closer to Anna, Evan’s true nature betrays itself and the question of what’s in the child’s best interest becomes not so clear anymore.
Objectively detailed, in a voice that refuses to intrude on the minds of its characters, A Lovely, Indecent Departure, captures in stark detail a world in which modern archetypes are turned upside down and shows what an extraordinary splash Steven Lee Gilbert has made with his first novel.

I enjoyed this book a lot. It was broken up into different character’s narrations, which was well done. I felt like I knew each one of the characters involved, even when bits of information and pieces to the puzzle were missing. This was definitely more of a character driven novel than a plot driven novel, but was still unpredictable and I kept turning the page to find out what pieces to the puzzle would be discovered next.

One of the best aspects about this book is that the reader is thrown into the story and doesn’t know the whole story. We as readers are finding out what happened and why about as fast as the other characters, and Anna doesn’t spell it out for us. I enjoyed this a lot. I felt like it kept me on my toes and kept me interested. Instead of bombarding us with information or the backstory as to why Anna leaves with her son, we are piecing it together as we go. I feel like it makes us judge the characters less harshly, too

After I put it down, I still had questions about Anna and Evan’s relationship and what led her to leave. I wondered what the letter Evan wrote her before their battle turned into the courts said. I think a truly good novel is one that keeps us thinking even after the final page is read, and this book did that for me.

At first, I realized the dialogue was not put into quotations. It’s written just like any other sentence is written. This irked me to no end at the beginning, but I quickly realized that it did something to the story. I still don’t know why no quotations were done, but I think it made the past somehow more distant. I’m not sure why I ended up loving the choice, but I did. It wasn’t difficult to figure out what was dialogue and what was not, so I went with it and thought it was a good decision.

This book was well written, incredibly descriptive and multiple storylines are present, which are all equally interesting. Each character showed growth, whether good or bad. I think a lot of books, especially character driven books, can end up giving the reader too much information, too much backstory, especially when written from different points of view. Somehow, Gilbert was able to give us a lot of insight to the characters without a boring or overstimulated narration and without being plot driven. There are a lot of things I still don’t know about the characters, yet I feel like I know them well. I think this shows a lot of talent and skill and I will definitely be on the lookout for more of Gilbert’s novels.

I definitely recommend this book. It’s a literary novel, a thriller, a mystery all wrapped up in one package.