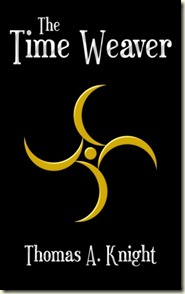 by Thomas A. Knight

Summary: It started with a car accident.
What should have killed thirty-year-old Seth Alkirk, instead causes time to stop. He didn't know what was happening as he took in the frozen world around him. He didn't know why he was the only one who could move, or breathe, or see what was going on. But when a rift opens in the middle of the intersection, and a vicious twelve-foot-tall creature steps through into his world, Seth does know one thing for certain...
He has to run. Or die.
Enter Galadir, a parallel world where magic rules. Discover a kingdom in danger of being overrun by a massive army. And follow Seth as he discovers he's not human - but a Time Weaver who can change the balance of the coming war, if only he can learn to control his powers in time.

I really enjoyed this fantasy novel. I thought the idea was interesting and unique. The beginning grabbed me immediately and sucked me in! I couldn’t put this novel down, despite the fact that I wasn’t really in the mood for fantasy at the time. The author created a spellbinding story that was descriptive and it grabbed my attention and wouldn’t let go.

When the story switches to the regular world and we meet Seth, I was a bit disappointed. I feel now that perhaps the author was much more comfortable with his world of Galadir than he was in the regular world. The dialogue was a little forced and didn’t flow very well in the beginning. Once the adventure began and Seth found himself in Galadir, all of the awkwardness I felt went away. The author was definitely at home in Galadir and showed in his writing.

A female soldier, Malia, is sent to grab Seth and take him to Galadir as it is his rightful home and he is the last Time Weaver. I absolutely loved her character. I think it was incredible to have a world that allowed a woman to be a soldier without a second glance. I say this because a lot of fantasy novels reflect older times in the world where women keep the homes or castles and if they do venture out onto the battlefield, they are constantly ridiculed. This didn’t appear to be an issue at all in the world of Galadir and I enjoyed this aspect.

The author’s writing was so superb that I found myself immersed in every sentence. Each time a character from Galadir spoke, I could hear their accents in my head and picture them so well. I cannot applaud the author enough for weaving such a well executed story that flowed so smoothly. I fell in love with the characters, like the Bard, the old wizard Merek, and Malia. Seth seemed to find his place in Galadir, too.

I found the plot to be unique and captivating. Seth has the ability to stop the flow of time and perform magic with just a thought. He doesn’t have any idea how to wield his powers and the adventure he finds himself on is a learning experience for him each step of the way. He seemed confident in himself, which I liked, while also being confused and shocked each time he learned to control a new power. It felt believable for me and made him more real to me.

With unforgettable characters, a unique and action packed plot, and descriptive writing, The Time Weaver is a wonderful fantasy novel. I’m looking forward to the sequel and reading other works by Thomas A. Knight. I haven’t felt so at home inside of the pages of a fantasy novel in a long time. I definitely recommend this book to others that enjoy fantasy. A lot of elements of it were some that I haven’t seen before and I found it to be extremely refreshing.