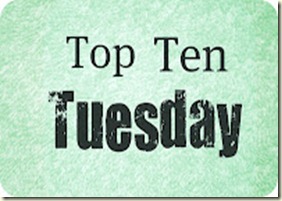 hosted by: The Broke and the Bookish

1. Dany from A Song of Ice and Fire series by George R.R. Martin. I’d like to have dragons, but mostly, I’d like to get her out of the desert and stop her from making stupid decisions. And I’d get Ser Jorah back.

2. Hermione from Harry Potter by J.K. Rowling. I think it would be awesome to be involved in all the crazy adventures at Hogwarts.

3. Milo from The Phantom Tollbooth by Norton Juster. The world that he entered is still the coolest place in fiction to me. I’d love to hang out with Tock and rescue Rhyme and Reason to restore order!

4. Sookie from the Sookie Stackhouse series by Charlaine Harris. I would love to be in a world where vampires exist along with fairies and shifters. And I’d like to see what it’s like to read minds.

5. Anyone from the Percy Jackson series by Rick Riordan. Either Percy himself or any other of the demigod kids. How could would it be to be a demigod?

6. Tally from the Uglies series by Scott Westerfeld. I’d like to think I’d make better choices. Or maybe I’d be Shea since I don’t like her, either. Maybe I’d be more useful to Tally.

7. Pam from the Sookie Stackhouse series by Charlaine Harris. I know I already put Sookie, but then I thought, I’d like to be a vampire, too. Who is better than Pam?!

I realize how many books I read where I would NOT want to switch places with the characters. Whether they are dystopian, post apocalyptic, or just weird (like Fight Club). And because I think my husband is way cooler than most romantic interests in books I love, I can’t fill up the rest of this list with books like that, either.