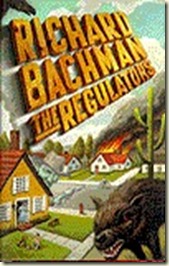 Summary: Richard Bachman is really Stephen King, and The Regulators is a kind of companion novel to Desperation, which was published simultaneously. These books mark the return of the Stephen King of old; the Stephen King of The Stand and Pet Sematary, where good and evil were at war and blood and gore flowed through the pages. The companion novels center around a new personification of evil that goes by the name of Tak, unearthed by an evil mining company that's destroying the earth in the name of profit. In each, the characters and situations are altered as King plays with questions of identity and form. But the real point here is what's on Tak's mind? Does it want to "Eat pork rinds? . . . Screw some NFL cheerleaders? . . . Rule the earth?"

I was warned by two of Stephen King loving family members that this is probably a book best skipped. Maybe they were right. I don’t know. I’m not a huge fan of King, though I enjoy a few of his books. If I didn’t already know that The Regulators is written by Stephen King under a pen name, I would have said that Bachman wrote in a Stephen King-ish way, but didn’t really deliver and possibly tried to hard to be Stephen King-ish.

This novel was good. I can’t say a novel isn’t when I’m constantly turning the page trying to figure out what happens next. I kept asking, “What on earth is happening and WHY?”

But now that I’m done, I am kind of blah about it. It wasn’t outright stupid, but the plot was kind of dumb now that I think about it. And it was predictable, once you get about 3/4 of the way and realize what is happening. At that point, my urge to keep turning the pages died down because I got my answer to what was happening.

The writing was weird, too. It wasn’t hard to follow, but the point of view kept jumping from character to character, which was almost too much when I’m just trying to figure out what is happening. None of the characters really stayed with me, either, which is strange for a Stephen King novel. Usually, the characters are amazing and at least one jumps out at you. For example, I cared about each and every character in It, The Stand, and even the short stories in The Skeleton Crew. The characters in this novel weren’t as in depth and I realized I didn’t even care how many of them died.

The parts I enjoyed the most were the firsthand accounts throughout the book, such as Audrey’s journal entries, Allen’s letter, Audrey’s letter to Jan, and the few newspaper clippings. Those really tied everything together and were a lot more personal for the characters.

I think 3 stars is about as fair as I can be with the book. Not the greatest, especially in Stephen King standards, but it was interesting, definitely a page turner, and certainly imaginative.